The Magician of Lublin 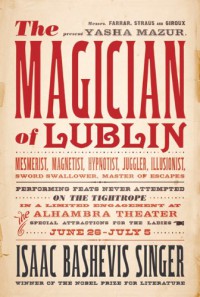 As the book opens, we're introduced to Yasha Mazur, a homeless man: literally wandering because he's away from Lublin touring most of the time, but also separated from the community of his town (who view him with admiration, suspicion, and condemnation), not believing in the religion of his youth, not participating in community ritual, childless, emotionally distant from his wife. It remains to be seen whether the rest of the book will take him away from Lublin for good and all, or bring him back home. He's a doubter, who knows he doesn't understand anything about the world; to some people this might be freedom, but for Yasha doubt is frightening. Also, Emilia, a woman who wants him to convert, to marry her and go to Italy, to take his career to new heights, represents temptation so strong he feels out of control. So the scene is set for a tale of terror, a quietly harrowing descent into an inferno of corruption, no less serious because its events are apparently farcical.

This is a midlife crisis, one that anyone who's changing from the person they were in youth and becoming dissatisfied with their life can probably relate to. But it's resolved in religious terms. To some extent, though religion is not a subject I usually think about much, I was able to follow along with the spiritual progress of Yasha's fall and his penitence, so well depicted. One thing that surprised me about the Epilogue was how hard Yasha had to struggle to feel an occasional moment of God's blessing. I'm too used to hearing the narrative of American evangelical Christianity, in which, when you repent, you're reborn at once and entirely filled with grace. This emphasis on salvation by grace is probably what Singer's theology would consider religion without discipline, leading to sin; again, I realize just how much I've absorbed the assumptions around me that I found it peculiar how much comfort Yasha took in reciting rules about when you may lie down and rise up, etc. A Catholic monastic order would probably come closer; it's noteworthy that in the story, Emilia, who thought about entering a convent, was able to understand Yasha's choice.

In any event, this strikes me as a brilliant book.