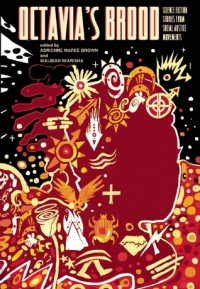 Many folks have asked us what science fiction could possibly have to do with social justice organizing. And every time, we have responded, “Everything. Everything.” We want organizers and movement builders to be able to claim the vast space of possibility, to be birthing visionary stories. Using their everyday realities and experiences of changing the world, they can form the foundation for the fantastic and, we hope, build a future where the fantastic liberates the mundane.

That's how this book that often depicts suffering and injustice is not depressing, because of its constant emphasis on the possibilities of change. Some of the stories depict transformed futures, some only seek to open up the way, but they are always keeping the better in mind.

This was something different when coming to it from a perspective within the genre. The great majority of the contributors to this volume are not professional science fiction writers, or even any kind of writers; they are activists and organizers, artists and performers. That's both good and bad.

The good is that the stories are diverse and untraditional; being "activisty" writing rather than "storytellery" writing makes for a nice change of pace. The utopian ideas are mostly daring, the authors all write passionately, and they choose a variety of forms, from biographical to report-like to mythological, from time-travel to alternate reality, from narrative to experimental. (The weirdest is "Sanford and Sun" by Dawolu Jabari Anderson where Sun Ra disrupts a sitcom script.) There were two pieces addressed to their author's descendants, mixing snippets of autobiography with hopes; I wonder if that is some entire subgenre. There were also two novel excerpts, two essays (including a rather interesting appreciation of Octavia Butler by Tananarive Due) and no less than three editorial contributions.

The bad is that, not surprisingly, the authors' writing skills in many cases could not support their ambitions. There were all too many earnestly clunking paragraphs here. Simplistic writing undermined depictions of communities and denunciation of wrongs. Some stories were shorter than they needed to be, and at least one was longer. Luckily there were some genuinely well-made stories too, and I don't think the flaws of the other ones made them unreadable. They were almost all interesting enough for one reading, it was just that I won't often be tempted to re-read.

I would like to highlight three stories that stood out for me (though I wouldn't call any of them truly great).

"Kafka's Last Laugh" by Vagabond. As well as Kafka, this story explicitly references Terry Gilliam, for the almost slapstick absurdity of its extreme dystopia. And yet, as an "if this goes on..." excercise it's fairly on point: laughter is invoked as the only possible response to the cruelties of capitalism; it needs to be funny, then, and it is.

"Revolution Shuffle" by Bao Phi. An intimate tale, depicting two guerilla fighters pausing to talk just before their attempt to liberate the prisoners of an internment camp. What drives them, their adjustments to a terrible world, their fears and their courage are well-drawn.

"Homing Instinct" by Dani McClain. A climate change story with an unusually thoughtful, uncertain examination of how people might approach the need to fundamentally alter their lifestyle.

Some others worth mentioning: "Manhunter" by Kalamu ya Salaam has potential, takes place in a complex future setting and has interesting characters, but it reads like an excerpt from a longer work, with the reader expected to already be familiar with the worldbuilding. "Black Angel" by Walidah Imarisha is blunt in its denunciation of racist beauty standards. "the river" by adrienne maree brown is very nicely written, but its underlying idea (the genius loci of Detroit resists carpetbaggers) might be a bit thin. "Hollow" by Mia Mingus, though awkwardly written, depicts an interesting society built entirely by disabled people.

The editors also included an excerpt from Terry Bisson's 1988 utopian alternate history Fire on the Mountain; Bisson is the only old-white-male writer in the volume, and the only SF professional. That this novel fits as well as it does in this context is a welcome indication that radical writers of color are not doing only a separate thing completely unheard by what passes as the "mainstream" -- though they cast the value of the mainstream in doubt.